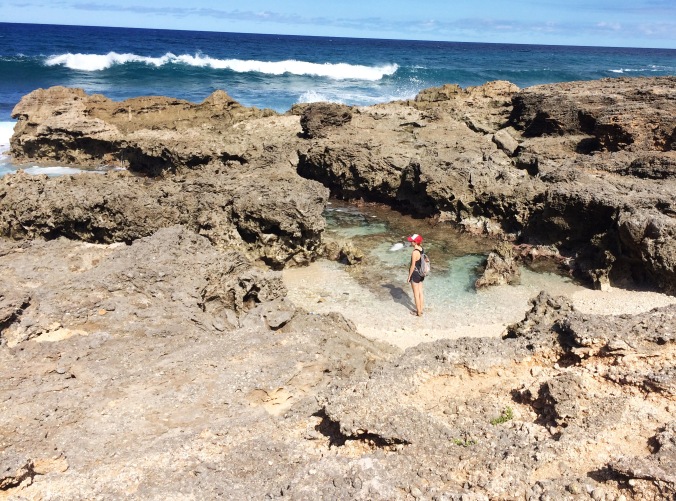 When the surf is calm, you can walk amongst the rocks and find solace in the tidepools along the north coast of the Ka‘ena Point hike.

It was a crystal-clear day on a winter’s weekend, and we cruised with the windows down along the North Shore, past Dillingham Airport where the skydivers were landing to the end of the road and the Ka‘ena Point hike.

I’ve avoided Ka‘ena Point for a long time, mostly because I didn’t think it fit in with what I’m looking for on a hike. To me, the wilderness means less people, not streams of them, and Ka‘ena Point is well traveled. But with friends in town for the holiday weekend and their sights set on seeing whales, I decided it was a good time to give it a try.

When we arrived in the late morning, there were many cars. Most people walk the big dirt 4×4 road all the way to the point, and I could see groups of people going up and over the first hill. Anxious to avoid the holiday crowds, I made a sharp right over the dunes and down towards the water. The sea was relatively calm and the rocky coastline was revealed.

I could walk on the rocks safely out of reach of the water, in and out of small caverns and tide pools. The sharp terrain forced me to slow down, to breath it in. It took the focus off the final destination and placed it back in the moment, where it always belongs.

I expected to find many others doing the same. But there was no one. Whether it’s a lack of awareness or an intentional avoidance due to the terrain (you need sturdy footwear, i.e. no flops), very few people choose to go this route. It was nice to look down the coast and see no one, minus the occasional fisherman checking his rod, knowing there were groups clunking along the road nearby. Out of sight, out of mind. My friends and I were literally alone and, as you see above, free to get lost in nature.

This would all change when we eventually reached the sanctuary, when we decided, for the sake of time, to brave the crowded 4×4 road on the return trip. It was a quicker route, but one where we had to consistently dodge four-wheel drive vehicles and puddles of mud.

To be honest, I felt lucky to have avoided it on the way in. By foregoing the road and taking the coast, I was able to see a totally different, totally local side of that area. I was able to bypass the streams of people walking the road, turning a popular hike in a popular place into a private experience.

Maybe you can try, too, when the surf is calm and you’re looking to see a different side of a place you’ve probably seen before.